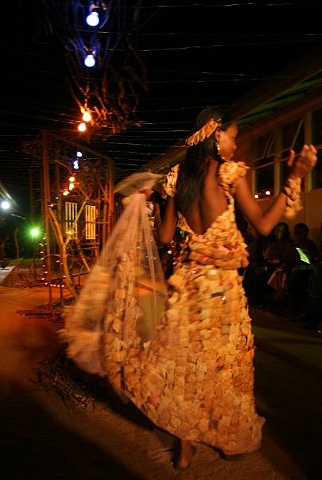 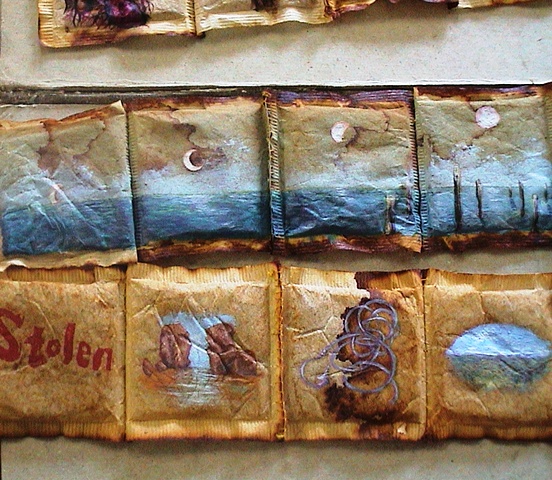 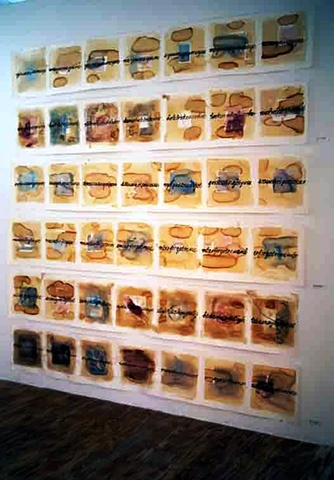 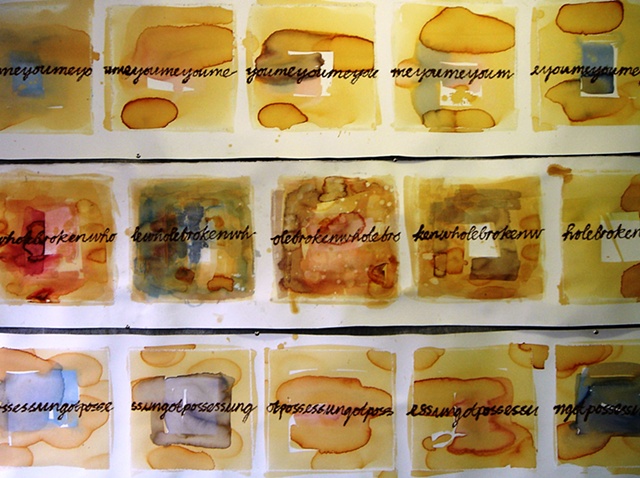 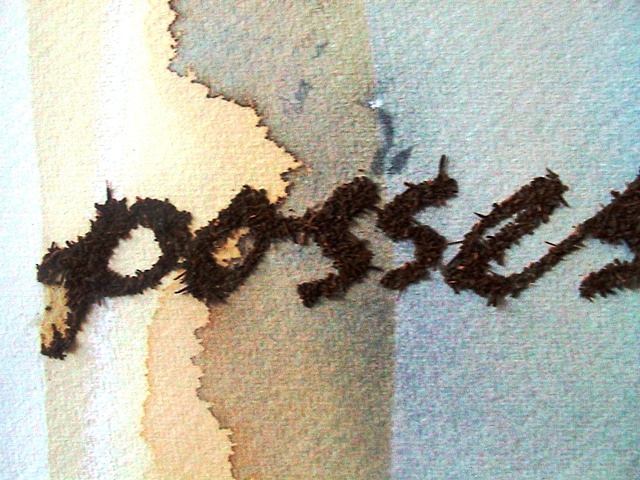 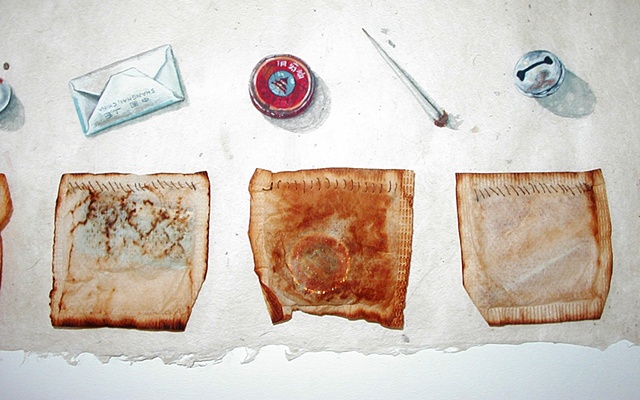 The teabag works started as a simple act of collecting the leftovers of my daily cups of rooibos tea. I was not considering making anything out of the bags at first, but as the collection grew I became more and more interested in them. The teabags first served as indicators of time passing. What had previously been a ritual of a shared cup of tea, at the beginning of our day, now became a lonely cup of tea marking the passing of another day and representing emptiness and a feeling of the uselessness of mundane daily activities.

The used teabags, stained and marked by chance according to how hot or dry a day was, fascinated me. I started playing with the teabags: re-soaking them, cutting them open, making stains from them onto sheets of paper, collecting their tealeaves… all these activities tended to be repetitive and without the idea of a final outcome important to the process. During this play I focused on the masses of teabags accumulating and representing the endless days I was spending in apparently aimless activities around my house. In time I had small piles of tea-leaves, teabags-some empty some full, and pages marked with tea stains scattered around the house.

I started actively making with the bags when I began stitching bags together. I stitched in various ways – adding to the piles and still not sure of to what end I was doing it. Then I started placing small personal objects into the empty bags. The objects were all simple and important things from our life. I stitched the bags shut, enclosing the objects in bags that hid them from the present. I made the objects into secrets about our past. Later, when I had started drawing and painting again, I took the objects out of the bags and painted them before replacing them into bags once again.

The repetition of the teabags printed onto sheets of paper (like the stains on the bags themselves) suggested the slight shifts in everyday patterns and hinted at variety and change that I was aware of but not prepared to celebrate or even acknowledge: I needed masses and masses of bags so that their individual aspects were drowned out by the regularity of the repetition and the unending pattern of daily activities. I was interested in the teabags representation of the awfulness of lonely time lying out before me and filled with meaningless activities. The irony of the process of course, is that I became fascinated in the very thing I was using to describe my disdain and my lack of interest.

I had been writing a little during this time: difficult and clumsy writing that didn’t function in any way as communicatable self expression. But I started extracting phrases and words and writing them in tealeaves. This developed into a series of works called Dyads. The words reflect my turmoil and conflicting emotions. The words were placed onto strips of canvas, and later onto paper, that was divided up into 7 squares representing 7 teabags, representing 7 days, representing the seemingly endless weeks ahead of me. On these ‘enlarged teabags’ I painted with tea. I thought about the stains on the actual bags and the scale shift (I had to work on the floor and was surrounded by everything) and the smell and touch of the tea was very satisfying.

On strips of teabags I had sewn together, I began painting quite labouriously. On the bags that represented to me the boring sameness of nowadays, I painted carefully, images that described our life together. At first these were made as small books to be opened and closed. Later I opened them up so that they are permanently open.