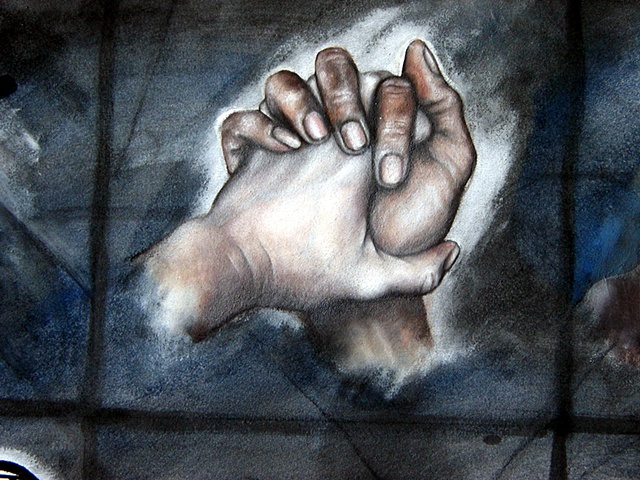 The Game - detail
oils and chalk on canvas 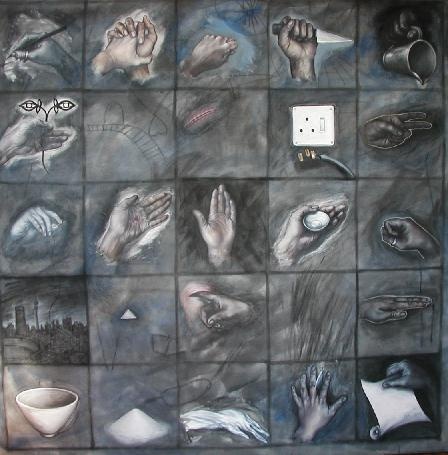 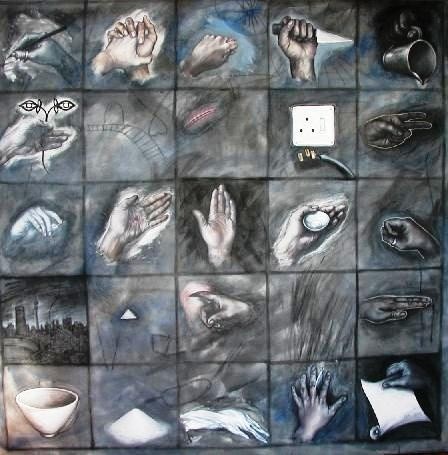 THE GAME 2003 The painting is 2 metres by 2 metres. The canvas is divided into 25 equally sized blocks. The work suggests a board game – the grid allows one to play across the surface creating numerous patterns and forming various narratives: The eye travels across the canvas from left to right, top to bottom, but then starts developing other routes: diagonals; leaps linking diametrically opposed blocks; the first and the last; spiralling towards the centre… With each new combination, each smaller painting takes on a new meaning. The combinations are extensive – the search for meaning endless as every encounter suggests another reading. ‘The Game’ of the title refers to the ultimate game with its combination of strange co-incidences, chance encounters and random combinations as well as controlled situations and designed outcomes: – Life. The game is the examination of the human state and the tug to convince oneself of any significance or relevance or value or investment in life. This ‘kidding’ oneself that there are reasons to make meaninglessness (life) hold meaning (the will to live). In a seemingly playful moment the ‘Game’ is a game of ‘Ching-chong-chop’. The canvas is presented as a map of the artist’s life. The first and the last blocks refer to the process of chronicling that dominates the artist’s activities and so becomes as much causal as documentary in function. The charcoal lines which vein across the surface underneath the oil paintings also refer to this drawing out of meaning and the invention of reality which she sees as an unavoidable aspect of the self-analysis of the artist. The charcoal lines seem to search for form or reference and in that undefined state perhaps carry more potency and surely more potential (and thus allure) – than the other marks that have been manipulated, pushed and pulled into some sort of representational order and meaning. This contrasting mark-making refers to debates around forms of art-making – with the precision of representation put up against the open-endedness of abstraction and both standing in contrast to the marklessness of conceptualism. Other blocks depict themes that recur in Erika Hibbert’s work: The Hand held Knife; The Stalked Eyes; The Stitched Scar; The Probed Scar; The Bowl; The Stigmata…